A way to uninstall Islam 360 from your PC

This data is about Islam 360 version 1.00.0000 alone. If you are manually uninstalling Islam 360 we recommend you to check if the following data is left behind on your PC.

The files below were left behind on your disk when you remove Islam 360:

Open regedit.exe in order to delete the following values:

Islam 360 is an application by Islam 360. Frequently, users want to remove this program. Sometimes this is troublesome because doing this manually takes some experience regarding PCs. The best QUICK way to remove Islam 360 is to use Advanced Uninstaller PRO. Here are some detailed instructions about how to do this:


For instance you can see that for Islam 360: 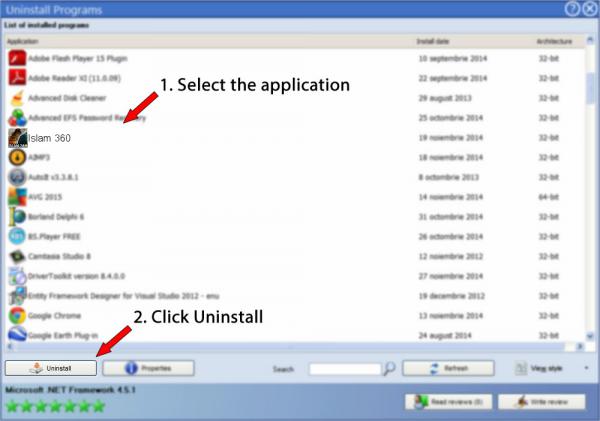 8. After removing Islam 360, Advanced Uninstaller PRO will ask you to run an additional cleanup. Click Next to proceed with the cleanup. All the items of Islam 360 which have been left behind will be detected and you will be able to delete them. By removing Islam 360 using Advanced Uninstaller PRO, you are assured that no Windows registry entries, files or folders are left behind on your system.