How to uninstall IranNastaliq from your system

You can find below detailed information on how to uninstall IranNastaliq for Windows. The Windows version was developed by NovinPendar. You can read more on NovinPendar or check for application updates here. More data about the program IranNastaliq can be seen at http://www.npshop.net. The application is usually located in the C:\Program Files\IranNastaliq folder. Keep in mind that this path can vary depending on the user's decision. The full uninstall command line for IranNastaliq is C:\Program Files\IranNastaliq\uninstall.exe. The program's main executable file is named uninstall.exe and its approximative size is 1.32 MB (1388544 bytes).

The executable files below are part of IranNastaliq. They occupy an average of 1.32 MB (1388544 bytes) on disk.

The information on this page is only about version 1.0 of IranNastaliq. IranNastaliq has the habit of leaving behind some leftovers.

Folders left behind when you uninstall IranNastaliq:

Generally, the following files are left on disk:

IranNastaliq is an application released by NovinPendar. Sometimes, users choose to remove this application. This can be efortful because performing this manually requires some advanced knowledge regarding removing Windows applications by hand. One of the best EASY action to remove IranNastaliq is to use Advanced Uninstaller PRO. Here are some detailed instructions about how to do this:


For example you can see that for IranNastaliq:

7. Click the Uninstall button. A confirmation window will appear. accept the removal by pressing Uninstall. Advanced Uninstaller PRO will then remove IranNastaliq. 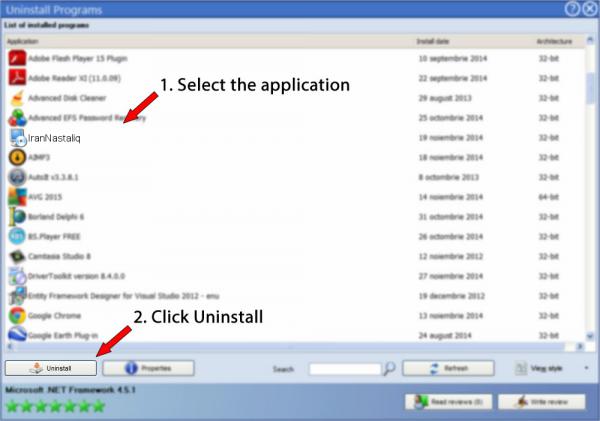