A guide to uninstall ISaGRAF 6.2 from your computer

This web page contains complete information on how to remove ISaGRAF 6.2 for Windows. It is produced by ISaGRAF. Go over here for more info on ISaGRAF. More details about ISaGRAF 6.2 can be found at http://www.isagraf.com. The program is usually located in the C:\Program Files\ISaGRAF\6.2 directory. Keep in mind that this location can differ depending on the user's decision. ISaGRAF 6.2's full uninstall command line is C:\Program Files\ISaGRAF\6.2\Uninstall ISaGRAF 6.2.exe. The application's main executable file is titled Uninstall ISaGRAF 6.2.exe and its approximative size is 2.36 MB (2471941 bytes).

The current page applies to ISaGRAF 6.2 version 6.2.548 alone. You can find below a few links to other ISaGRAF 6.2 releases:

A way to remove ISaGRAF 6.2 from your computer with Advanced Uninstaller PRO

ISaGRAF 6.2 is an application marketed by ISaGRAF. Sometimes, people try to remove this application. This is difficult because doing this by hand requires some experience related to PCs. The best QUICK manner to remove ISaGRAF 6.2 is to use Advanced Uninstaller PRO. Take the following steps on how to do this:


For instance you can see that for ISaGRAF 6.2: 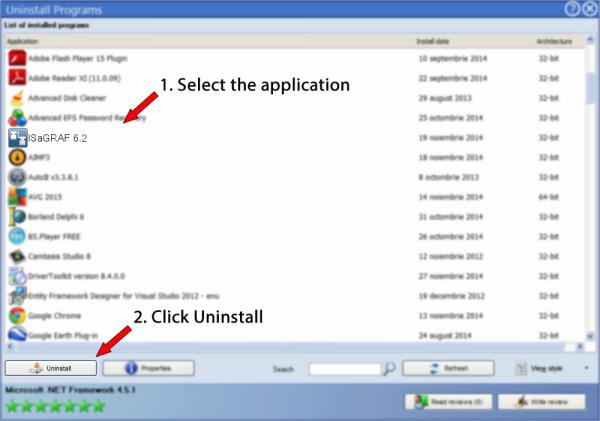