How to uninstall Grim Dawn from your system

This web page contains detailed information on how to uninstall Grim Dawn for Windows. It is produced by GOG.com. You can find out more on GOG.com or check for application updates here. More data about the program Grim Dawn can be seen at http://www.gog.com. Usually the Grim Dawn application is found in the C:\Program Files (x86)\Grim Dawn folder, depending on the user's option during install. You can remove Grim Dawn by clicking on the Start menu of Windows and pasting the command line C:\Program Files (x86)\Grim Dawn\unins000.exe. Note that you might receive a notification for administrator rights. Grim Dawn.exe is the Grim Dawn's main executable file and it takes around 2.72 MB (2854400 bytes) on disk.

The current web page applies to Grim Dawn version 2.0.0.5 only. You can find below info on other releases of Grim Dawn:

...click to view all...
Following the uninstall process, the application leaves leftovers on the PC. Part_A few of these are listed below.

The files below remain on your disk by Grim Dawn when you uninstall it:

Generally the following registry data will not be cleaned:

Grim Dawn is an application released by the software company GOG.com. Sometimes, people choose to uninstall it. Sometimes this is easier said than done because doing this by hand requires some skill regarding Windows program uninstallation. The best SIMPLE practice to uninstall Grim Dawn is to use Advanced Uninstaller PRO. Here are some detailed instructions about how to do this:

6. Navigate the list of applications until you locate Grim Dawn or simply activate the Search feature and type in "Grim Dawn". If it exists on your system the Grim Dawn app will be found very quickly. When you click Grim Dawn in the list , some data about the application is available to you:


For example you can see that for Grim Dawn:

7. Press the Uninstall button. A confirmation dialog will appear. Confirm the removal by pressing Uninstall. Advanced Uninstaller PRO will then uninstall Grim Dawn. 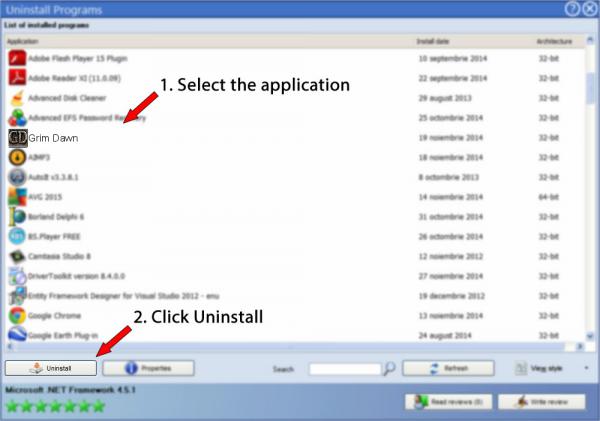 8. After removing Grim Dawn, Advanced Uninstaller PRO will offer to run a cleanup. Press Next to go ahead with the cleanup. All the items of Grim Dawn which have been left behind will be found and you will be asked if you want to delete them. By removing Grim Dawn using Advanced Uninstaller PRO, you can be sure that no Windows registry items, files or folders are left behind on your disk.

This page is not a recommendation to remove Grim Dawn by GOG.com from your PC, we are not saying that Grim Dawn by GOG.com is not a good software application. This text only contains detailed info on how to remove Grim Dawn supposing you decide this is what you want to do. The information above contains registry and disk entries that other software left behind and Advanced Uninstaller PRO stumbled upon and classified as "leftovers" on other users' computers.