A way to uninstall Google Güncelleyici from your PC

Google Güncelleyici is a Windows program. Read more about how to remove it from your computer. The Windows version was created by Google Inc.. You can read more on Google Inc. or check for application updates here. Google Güncelleyici is normally installed in the C:\Program Files\Google\Google Updater folder, however this location may differ a lot depending on the user's choice when installing the application. The entire uninstall command line for Google Güncelleyici is "C:\Program Files\Google\Google Updater\GoogleUpdater.exe" -uninstall. The application's main executable file has a size of 157.98 KB (161776 bytes) on disk and is named GoogleUpdaterRestartManager.exe.

Google Güncelleyici installs the following the executables on your PC, occupying about 876.42 KB (897456 bytes) on disk.


7. Press the Uninstall button. A confirmation dialog will come up. Confirm the uninstall by pressing Uninstall. Advanced Uninstaller PRO will then uninstall Google Güncelleyici. 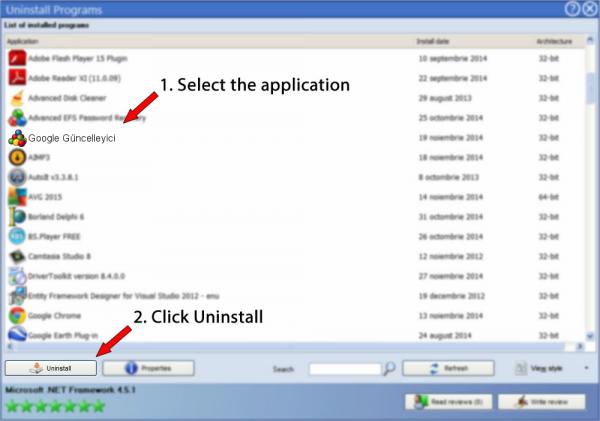