A way to uninstall FeatureCAM 2016 from your computer

This page contains detailed information on how to remove FeatureCAM 2016 for Windows. It is produced by Delcam. Check out here for more details on Delcam. FeatureCAM 2016 is normally set up in the C:\Program Files\Delcam\FeatureCAM folder, however this location can differ a lot depending on the user's choice while installing the application. The full command line for uninstalling FeatureCAM 2016 is C:\Program Files\Delcam\FeatureCAM\uninstall.exe. Note that if you will type this command in Start / Run Note you may get a notification for admin rights. The application's main executable file has a size of 57.66 MB (60465600 bytes) on disk and is named ezfm.exe.

FeatureCAM 2016 is a program by Delcam. Some users try to remove it. This is efortful because deleting this by hand takes some knowledge related to Windows internal functioning. The best SIMPLE way to remove FeatureCAM 2016 is to use Advanced Uninstaller PRO. Take the following steps on how to do this: 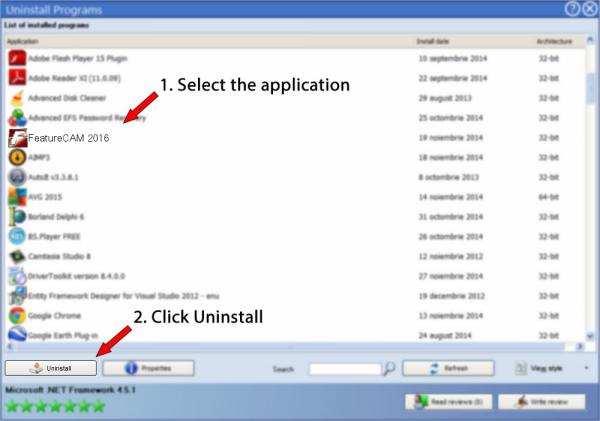