How to uninstall EdiSAP 2014 from your computer

EdiSAP 2014 is a Windows program. Read below about how to uninstall it from your PC. The Windows version was developed by S.I.S.. You can read more on S.I.S. or check for application updates here. You can see more info on EdiSAP 2014 at http://www.sis.ingegneria.it. The application is often found in the C:\Program Files (x86)\SIS\EdiSAP2014 folder (same installation drive as Windows). The full command line for removing EdiSAP 2014 is C:\Program Files (x86)\SIS\EdiSAP2014\unins000.exe. Note that if you will type this command in Start / Run Note you may be prompted for admin rights. EdiSAP.exe is the EdiSAP 2014's main executable file and it occupies about 18.56 MB (19466752 bytes) on disk.

EdiSAP 2014 is a program offered by the software company S.I.S.. Frequently, people decide to remove it. Sometimes this is difficult because uninstalling this manually takes some knowledge related to removing Windows applications by hand. One of the best EASY procedure to remove EdiSAP 2014 is to use Advanced Uninstaller PRO. Take the following steps on how to do this:

6. Scroll the list of programs until you find EdiSAP 2014 or simply activate the Search field and type in "EdiSAP 2014". If it is installed on your PC the EdiSAP 2014 program will be found very quickly. Notice that after you select EdiSAP 2014 in the list of apps, some data regarding the program is available to you: 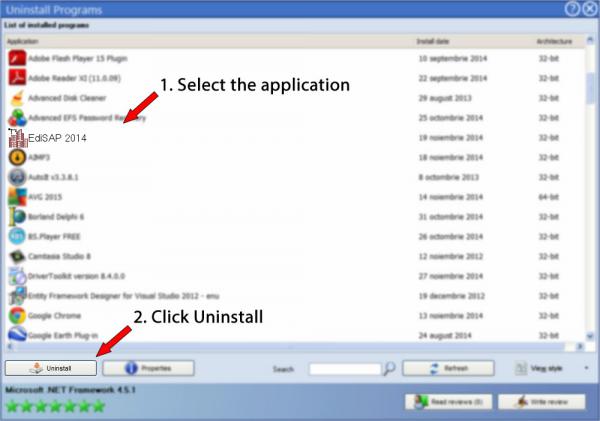