A way to uninstall EZmix 64-bit from your PC

EZmix 64-bit is a software application. This page holds details on how to uninstall it from your PC. It was coded for Windows by Toontrack. You can find out more on Toontrack or check for application updates here. More data about the software EZmix 64-bit can be seen at http://www.toontrack.com. EZmix 64-bit is usually installed in the C:\Program Files\Toontrack folder, however this location can differ a lot depending on the user's option when installing the program. EZmix 64-bit's complete uninstall command line is MsiExec.exe /X{3D08DB3C-A805-4DDE-861C-85944AA2BA05}. EZmix64.exe is the programs's main file and it takes circa 5.34 MB (5601304 bytes) on disk.

The information on this page is only about version 2.1.0 of EZmix 64-bit. Click on the links below for other EZmix 64-bit versions:

EZmix 64-bit is a program marketed by the software company Toontrack. Sometimes, computer users decide to erase this program. Sometimes this is easier said than done because performing this by hand takes some knowledge related to Windows internal functioning. The best EASY action to erase EZmix 64-bit is to use Advanced Uninstaller PRO. Here is how to do this:


For example you can see that for EZmix 64-bit:

7. Press the Uninstall button. A confirmation window will come up. accept the removal by pressing Uninstall. Advanced Uninstaller PRO will then uninstall EZmix 64-bit. 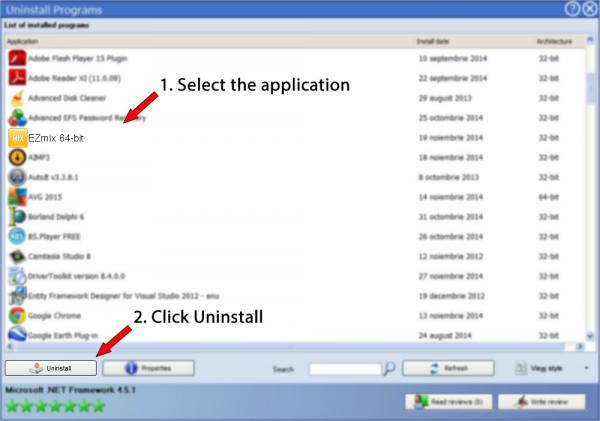