How to uninstall ESN Sonar from your PC

This page contains thorough information on how to uninstall ESN Sonar for Windows. It was created for Windows by ESN Social Software AB. More information on ESN Social Software AB can be found here. The application is usually installed in the C:\Program Files (x86)\Battlelog Web Plugins\Sonar directory (same installation drive as Windows). ESN Sonar's full uninstall command line is C:\Program Files (x86)\Battlelog Web Plugins\Sonar\esnsonar_uninstall.exe. esnsonar_uninstall.exe is the ESN Sonar's main executable file and it occupies around 346.03 KB (354337 bytes) on disk.

The executable files below are installed together with ESN Sonar. They take about 1.43 MB (1503625 bytes) on disk.


A considerable amount of files, folders and Windows registry data can not be deleted when you want to remove ESN Sonar from your PC.

You will find in the Windows Registry that the following keys will not be cleaned; remove them one by one using regedit.exe:

ESN Sonar is an application marketed by the software company ESN Social Software AB. Some people decide to remove this program. This can be difficult because deleting this manually takes some advanced knowledge regarding PCs. One of the best QUICK manner to remove ESN Sonar is to use Advanced Uninstaller PRO. Here are some detailed instructions about how to do this:

6. Scroll the list of programs until you find ESN Sonar or simply activate the Search field and type in "ESN Sonar". If it is installed on your PC the ESN Sonar program will be found automatically. When you click ESN Sonar in the list , some information regarding the program is made available to you: 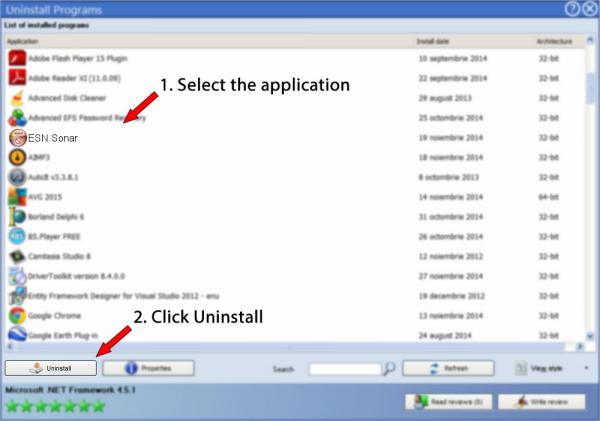 8. After uninstalling ESN Sonar, Advanced Uninstaller PRO will ask you to run an additional cleanup. Click Next to perform the cleanup. All the items of ESN Sonar that have been left behind will be detected and you will be asked if you want to delete them. By uninstalling ESN Sonar using Advanced Uninstaller PRO, you can be sure that no registry entries, files or directories are left behind on your disk.

The text above is not a piece of advice to uninstall ESN Sonar by ESN Social Software AB from your PC, we are not saying that ESN Sonar by ESN Social Software AB is not a good application. This text simply contains detailed info on how to uninstall ESN Sonar in case you decide this is what you want to do. Here you can find registry and disk entries that other software left behind and Advanced Uninstaller PRO stumbled upon and classified as "leftovers" on other users' PCs.