How to uninstall DocuPrint M255 df_z from your computer

This info is about DocuPrint M255 df_z for Windows. Below you can find details on how to uninstall it from your PC. The Windows version was developed by Fuji Xerox. More information on Fuji Xerox can be found here. DocuPrint M255 df_z is usually set up in the C:\Program Files (x86)\Fuji Xerox directory, depending on the user's choice. DocuPrint M255 df_z's entire uninstall command line is C:\Program Files (x86)\InstallShield Installation Information\{186C2B16-A567-4268-BF4B-A22D876BA40F}\setup.exe. fxn2tbE.exe is the programs's main file and it takes circa 4.15 MB (4352512 bytes) on disk.

DocuPrint M255 df_z is a program offered by Fuji Xerox. Sometimes, users choose to remove this program. Sometimes this is troublesome because deleting this manually takes some experience related to Windows internal functioning. One of the best SIMPLE approach to remove DocuPrint M255 df_z is to use Advanced Uninstaller PRO. Here are some detailed instructions about how to do this:


7. Press the Uninstall button. A confirmation page will come up. Confirm the removal by pressing Uninstall. Advanced Uninstaller PRO will then remove DocuPrint M255 df_z. 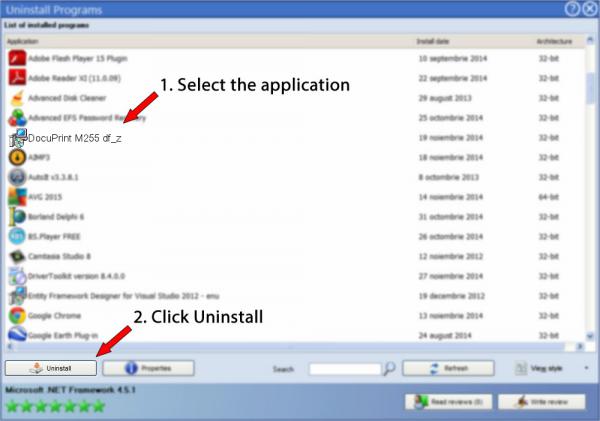