A way to uninstall Disk Reviver from your computer

This web page is about Disk Reviver for Windows. Here you can find details on how to remove it from your computer. It is produced by Corel Corporation. Check out here where you can read more on Corel Corporation. Click on http://goto.reviversoft.com/action/?product=HDDR&LinkType=Help to get more data about Disk Reviver on Corel Corporation's website. Usually the Disk Reviver application is placed in the C:\Program Files (x86)\Disk Reviver folder, depending on the user's option during install. The full command line for removing Disk Reviver is C:\Program Files (x86)\Disk Reviver\unins000.exe. Keep in mind that if you will type this command in Start / Run Note you might get a notification for administrator rights. The application's main executable file has a size of 112.42 KB (115120 bytes) on disk and is named RequireAdministrator.exe.

Disk Reviver is a program by Corel Corporation. Frequently, computer users want to remove it. Sometimes this is hard because deleting this manually requires some skill regarding removing Windows programs manually. The best QUICK practice to remove Disk Reviver is to use Advanced Uninstaller PRO. Here is how to do this:

6. Scroll the list of programs until you find Disk Reviver or simply activate the Search field and type in "Disk Reviver". The Disk Reviver app will be found automatically. Notice that when you click Disk Reviver in the list , some data about the program is shown to you:


For instance you can see that for Disk Reviver: 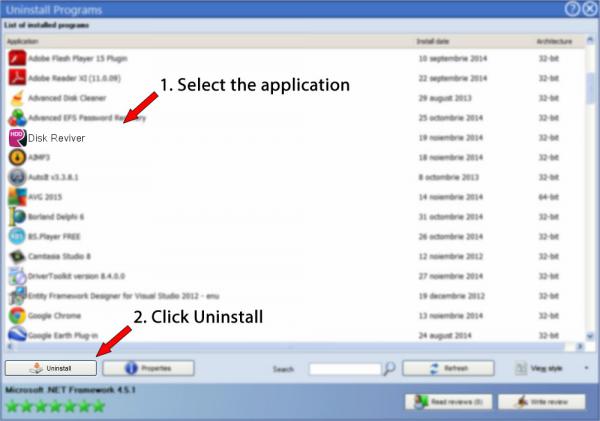