A way to uninstall DigiOnSound 11 from your system

This web page is about DigiOnSound 11 for Windows. Below you can find details on how to remove it from your PC. It is developed by DigiOn. You can find out more on DigiOn or check for application updates here. DigiOnSound 11 is commonly set up in the C:\Program Files\DigiOn\DigiOnSound 11 directory, but this location can differ a lot depending on the user's choice while installing the program. C:\Program Files\InstallShield Installation Information\{81B459CC-6913-429D-A95C-8CB4E971EEA2}\setup.exe is the full command line if you want to uninstall DigiOnSound 11. The program's main executable file has a size of 3.59 MB (3760576 bytes) on disk and is titled DoSound11.exe.

DigiOnSound 11 is a program released by DigiOn. Frequently, computer users choose to uninstall this application. Sometimes this can be efortful because doing this by hand requires some experience regarding Windows internal functioning. The best EASY solution to uninstall DigiOnSound 11 is to use Advanced Uninstaller PRO. Here is how to do this:


7. Click the Uninstall button. A confirmation page will come up. Confirm the removal by pressing Uninstall. Advanced Uninstaller PRO will then remove DigiOnSound 11. 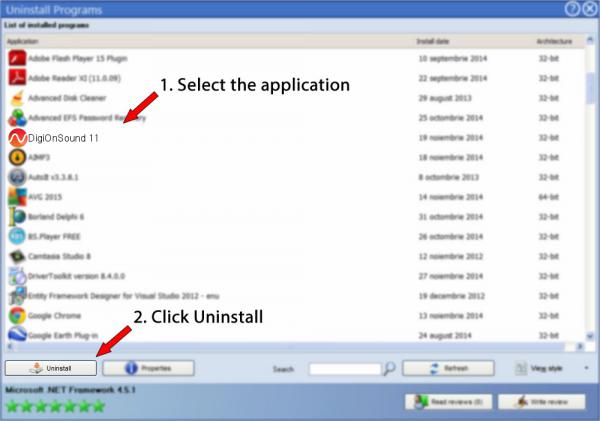