A way to uninstall Deformer 4 from your system

You can find below details on how to remove Deformer 4 for Windows. The Windows version was developed by STOIK Technology. More information about STOIK Technology can be found here. More details about the program Deformer 4 can be seen at www.stoik.com. The program is usually found in the C:\groapa directory (same installation drive as Windows). You can uninstall Deformer 4 by clicking on the Start menu of Windows and pasting the command line C:\Program Files\InstallShield Installation Information\{E3276AC4-34AE-4D15-BBEC-DBD41BA17665}\setup.exe. Note that you might be prompted for admin rights. setup.exe is the Deformer 4's main executable file and it occupies about 391.07 KB (400456 bytes) on disk.

Deformer 4 is a program by STOIK Technology. Frequently, computer users try to erase it. This can be difficult because uninstalling this by hand takes some experience regarding removing Windows programs manually. One of the best EASY solution to erase Deformer 4 is to use Advanced Uninstaller PRO. Here is how to do this:

6. Navigate the list of programs until you find Deformer 4 or simply click the Search feature and type in "Deformer 4". The Deformer 4 program will be found very quickly. Notice that after you click Deformer 4 in the list of apps, some information regarding the program is available to you:


For instance you can see that for Deformer 4:

7. Press the Uninstall button. A window asking you to confirm will appear. accept the removal by clicking Uninstall. Advanced Uninstaller PRO will remove Deformer 4. 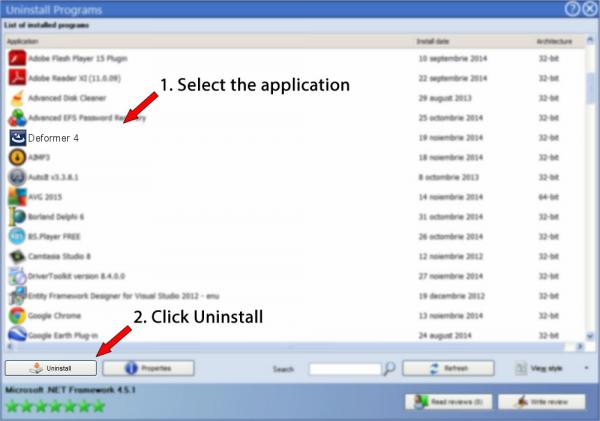 The text above is not a piece of advice to uninstall Deformer 4 by STOIK Technology from your PC, nor are we saying that Deformer 4 by STOIK Technology is not a good application. This text only contains detailed instructions on how to uninstall Deformer 4 in case you want to. The information above contains registry and disk entries that our application Advanced Uninstaller PRO discovered and classified as "leftovers" on other users' PCs.