How to uninstall DanBasic V from your system

DanBasic V is a Windows program. Read below about how to uninstall it from your PC. It was developed for Windows by Danfoss. You can find out more on Danfoss or check for application updates here. DanBasic V is commonly installed in the C:\Danfoss\DanBasic directory, however this location can differ a lot depending on the user's choice while installing the application. The complete uninstall command line for DanBasic V is C:\Programme\InstallShield Installation Information\{ED2FC50F-C1A5-40DA-B6A7-A787F7323E86}\setup.exe. setup.exe is the DanBasic V's main executable file and it occupies around 789.78 KB (808736 bytes) on disk.

The information on this page is only about version 5.01.01 of DanBasic V. You can find below info on other releases of DanBasic V:

DanBasic V is a program by Danfoss. Frequently, computer users choose to remove this program. This can be difficult because removing this by hand requires some experience regarding Windows program uninstallation. The best QUICK way to remove DanBasic V is to use Advanced Uninstaller PRO. Take the following steps on how to do this:

6. Navigate the list of applications until you find DanBasic V or simply activate the Search feature and type in "DanBasic V". If it exists on your system the DanBasic V application will be found automatically. When you click DanBasic V in the list , the following data regarding the program is available to you:


7. Press the Uninstall button. A confirmation page will show up. accept the removal by pressing Uninstall. Advanced Uninstaller PRO will then uninstall DanBasic V. 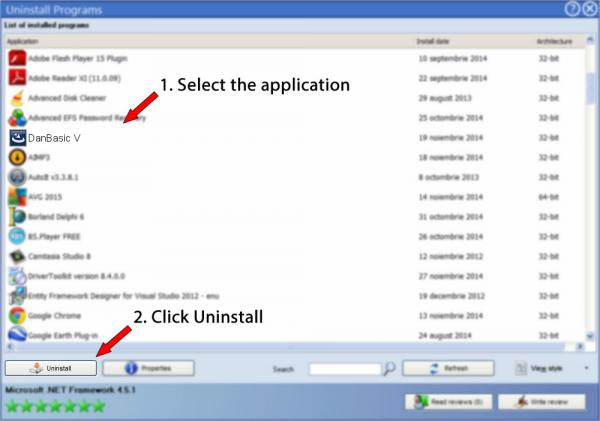