A way to uninstall CodFiscale from your computer

CodFiscale is a computer program. This page holds details on how to remove it from your computer. It is developed by TechSoft.it. Open here where you can read more on TechSoft.it. You can get more details related to CodFiscale at http://www.techsoft.it. The program is usually placed in the C:\Program Files\TechSoft\CodFiscale directory. Keep in mind that this location can vary being determined by the user's preference. You can remove CodFiscale by clicking on the Start menu of Windows and pasting the command line C:\Program Files\TechSoft\CodFiscale\unins000.exe. Keep in mind that you might get a notification for administrator rights. CodFiscale's main file takes around 1.64 MB (1716224 bytes) and its name is CodFiscale.exe.

The executable files below are installed along with CodFiscale. They occupy about 2.28 MB (2390946 bytes) on disk.

CodFiscale is a program by TechSoft.it. Sometimes, people try to uninstall it. Sometimes this can be troublesome because performing this by hand requires some know-how regarding Windows internal functioning. The best EASY solution to uninstall CodFiscale is to use Advanced Uninstaller PRO. Here is how to do this:


For instance you can see that for CodFiscale: 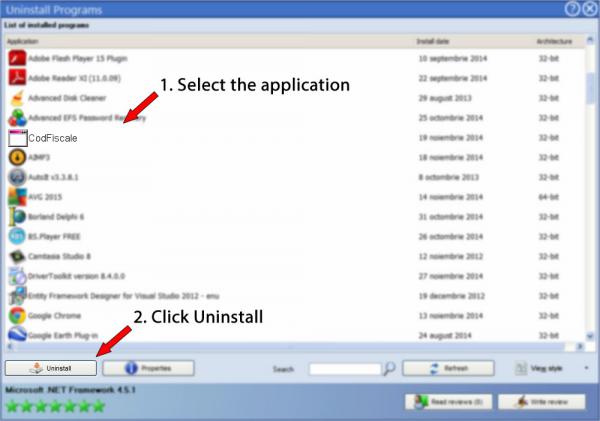 This page is not a piece of advice to remove CodFiscale by TechSoft.it from your PC, nor are we saying that CodFiscale by TechSoft.it is not a good application for your PC. This page simply contains detailed info on how to remove CodFiscale in case you want to. The information above contains registry and disk entries that our application Advanced Uninstaller PRO discovered and classified as "leftovers" on other users' PCs.