A guide to uninstall CnoPlus 2014 from your PC

CnoPlus 2014 is a computer program. This page is comprised of details on how to remove it from your PC. It was created for Windows by Sage Portugal. Additional info about Sage Portugal can be seen here. Click on www.sage.pt to get more information about CnoPlus 2014 on Sage Portugal's website. The program is usually installed in the C:\Program Files\Sage\EL\SCno folder. Keep in mind that this path can differ being determined by the user's decision. CnoPlus 2014's complete uninstall command line is MsiExec.exe /I{92131D0D-2A27-414F-9CE8-0FA8B92CC97A}. SCno.exe is the programs's main file and it takes around 12.46 MB (13064488 bytes) on disk.

CnoPlus 2014 is an application released by the software company Sage Portugal. Sometimes, people want to erase this program. Sometimes this is hard because uninstalling this by hand takes some know-how regarding Windows internal functioning. The best SIMPLE procedure to erase CnoPlus 2014 is to use Advanced Uninstaller PRO. Here is how to do this:


For example you can see that for CnoPlus 2014:

7. Click the Uninstall button. A confirmation page will show up. accept the removal by clicking Uninstall. Advanced Uninstaller PRO will automatically uninstall CnoPlus 2014. 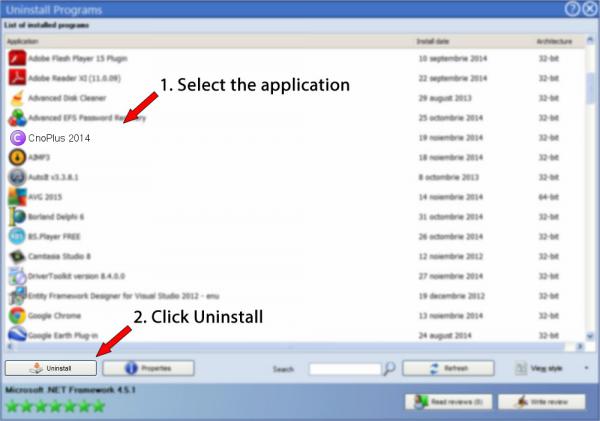