A guide to uninstall City Magnate from your PC

This page contains detailed information on how to remove City Magnate for Windows. It was coded for Windows by My World My Apps Ltd.. Go over here for more information on My World My Apps Ltd.. More details about City Magnate can be found at http://www.allgameshome.com/. City Magnate is frequently installed in the C:\Program Files (x86)\AllGamesHome.com\City Magnate folder, but this location may vary a lot depending on the user's option while installing the program. "C:\Program Files (x86)\AllGamesHome.com\City Magnate\unins000.exe" is the full command line if you want to uninstall City Magnate. The program's main executable file has a size of 114.00 KB (116736 bytes) on disk and is labeled City Magnate.exe.

The executable files below are installed together with City Magnate. They occupy about 1.23 MB (1290522 bytes) on disk.

The information on this page is only about version 1.0 of City Magnate.

City Magnate is an application by the software company My World My Apps Ltd.. Some computer users want to uninstall this application. This is hard because doing this by hand takes some advanced knowledge regarding removing Windows applications by hand. The best EASY procedure to uninstall City Magnate is to use Advanced Uninstaller PRO. Here are some detailed instructions about how to do this:


For example you can see that for City Magnate: 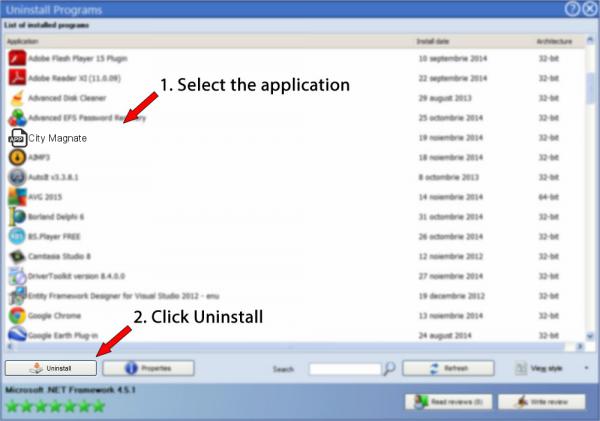