A way to uninstall City Magnate from your PC

The executable files below are installed together with City Magnate. They take about 4.48 MB (4692458 bytes) on disk.

This info is about City Magnate version 1.0 alone. After the uninstall process, the application leaves some files behind on the computer. Part_A few of these are shown below.

You will find in the Windows Registry that the following keys will not be uninstalled; remove them one by one using regedit.exe:

How to delete City Magnate with Advanced Uninstaller PRO

City Magnate is a program released by MyPlayCity, Inc.. Some users choose to uninstall this application. This can be hard because performing this by hand takes some advanced knowledge related to Windows program uninstallation. The best EASY solution to uninstall City Magnate is to use Advanced Uninstaller PRO. Here is how to do this:

6. Navigate the list of programs until you locate City Magnate or simply click the Search feature and type in "City Magnate". The City Magnate program will be found automatically. After you select City Magnate in the list , some information regarding the program is available to you:


For instance you can see that for City Magnate: 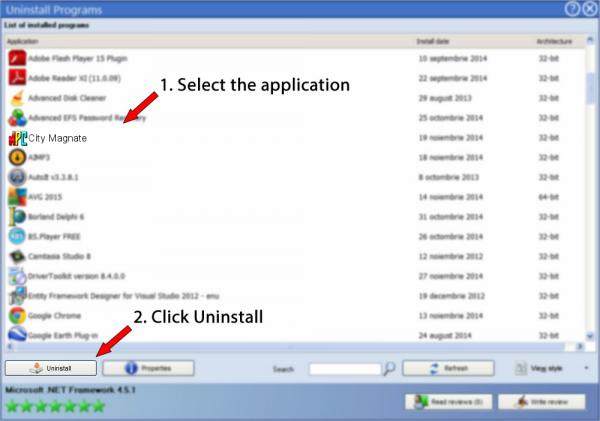 The text above is not a piece of advice to remove City Magnate by MyPlayCity, Inc. from your computer, nor are we saying that City Magnate by MyPlayCity, Inc. is not a good application for your PC. This text only contains detailed info on how to remove City Magnate in case you decide this is what you want to do. The information above contains registry and disk entries that other software left behind and Advanced Uninstaller PRO discovered and classified as "leftovers" on other users' computers.