This info is about Catalog 2013-2014 for Windows. Here you can find details on how to uninstall it from your computer. It was coded for Windows by Nxtbook Media, LLC. You can read more on Nxtbook Media, LLC or check for application updates here. The program is usually placed in the C:\Program Files (x86)\aip\general\aip_catalog1314 directory (same installation drive as Windows). You can remove Catalog 2013-2014 by clicking on the Start menu of Windows and pasting the command line msiexec /qb /x {770E826F-C27D-6B1F-2BE8-67DB1A58F14E}. Keep in mind that you might get a notification for administrator rights. aip_catalog1314.exe is the Catalog 2013-2014's main executable file and it occupies around 139.00 KB (142336 bytes) on disk.

Catalog 2013-2014 is a program offered by the software company Nxtbook Media, LLC. Sometimes, computer users try to erase this application. Sometimes this can be troublesome because uninstalling this by hand requires some advanced knowledge regarding Windows internal functioning. One of the best EASY approach to erase Catalog 2013-2014 is to use Advanced Uninstaller PRO. Here are some detailed instructions about how to do this: 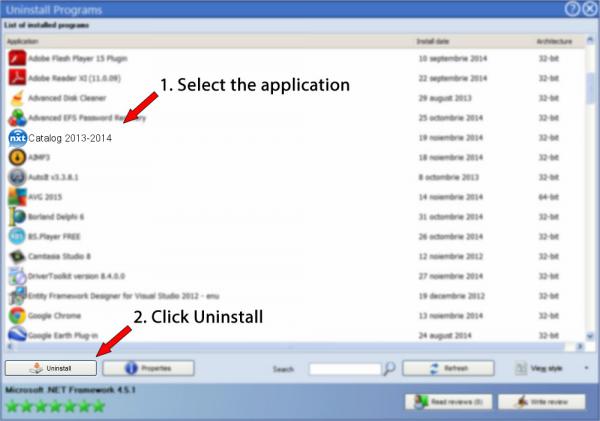