A way to uninstall CPUID CPU-Z OC 1.76 from your system

This page is about CPUID CPU-Z OC 1.76 for Windows. Below you can find details on how to remove it from your PC. The Windows version was developed by CPUID, Inc.. You can read more on CPUID, Inc. or check for application updates here. CPUID CPU-Z OC 1.76 is commonly set up in the C:\Program Files\CPUID\CPU-Z OC folder, however this location may vary a lot depending on the user's decision when installing the program. You can remove CPUID CPU-Z OC 1.76 by clicking on the Start menu of Windows and pasting the command line C:\Program Files\CPUID\CPU-Z OC\unins000.exe. Note that you might be prompted for admin rights. cpuz.exe is the programs's main file and it takes close to 8.53 MB (8945880 bytes) on disk.

CPUID CPU-Z OC 1.76 is a program released by CPUID, Inc.. Sometimes, users decide to erase it. Sometimes this is troublesome because performing this manually requires some advanced knowledge related to Windows program uninstallation. One of the best QUICK approach to erase CPUID CPU-Z OC 1.76 is to use Advanced Uninstaller PRO. Take the following steps on how to do this: 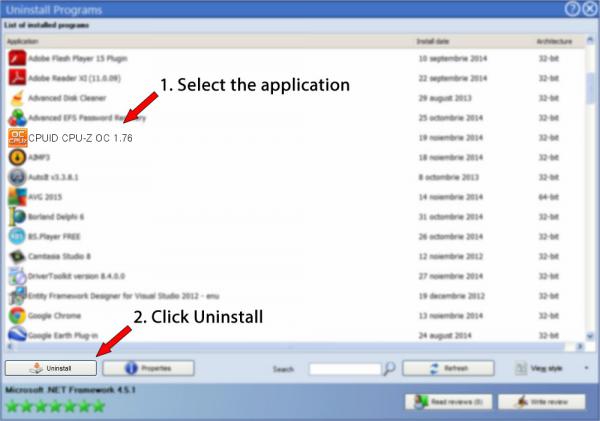