How to uninstall CPUID CPU-Z OC 1.71 from your system

You can find on this page detailed information on how to uninstall CPUID CPU-Z OC 1.71 for Windows. The Windows version was developed by CPUID, Inc.. You can read more on CPUID, Inc. or check for application updates here. The program is usually found in the C:\Program Files\CPUID\CPU-Z OC directory. Take into account that this path can differ being determined by the user's choice. The entire uninstall command line for CPUID CPU-Z OC 1.71 is C:\Program Files\CPUID\CPU-Z OC\unins000.exe. The application's main executable file occupies 8.43 MB (8841960 bytes) on disk and is labeled cpuz.exe.

How to remove CPUID CPU-Z OC 1.71 from your computer using Advanced Uninstaller PRO 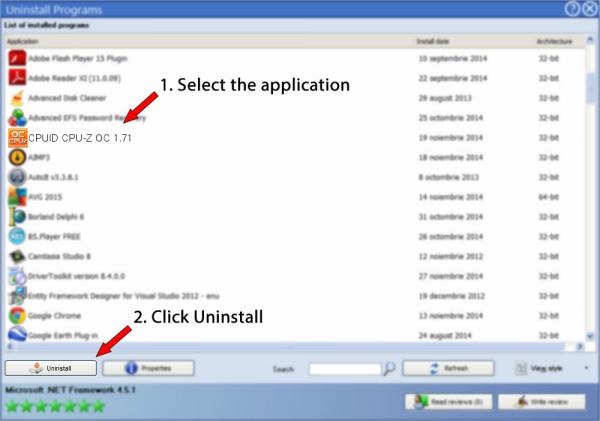