This page is about CPUID CPU-Z 1.71.1 for Windows. Here you can find details on how to remove it from your PC. The application is often located in the C:\Program Files\CPUID\CPU-Z directory. Keep in mind that this path can differ depending on the user's preference. CPUID CPU-Z 1.71.1's full uninstall command line is "C:\Program Files\CPUID\CPU-Z\unins000.exe". The application's main executable file occupies 3.02 MB (3167976 bytes) on disk and is named cpuz.exe.

How to delete CPUID CPU-Z 1.71.1 from your PC with the help of Advanced Uninstaller PRO

Sometimes, people decide to remove it. This is troublesome because uninstalling this manually takes some advanced knowledge related to PCs. One of the best SIMPLE practice to remove CPUID CPU-Z 1.71.1 is to use Advanced Uninstaller PRO. Take the following steps on how to do this: 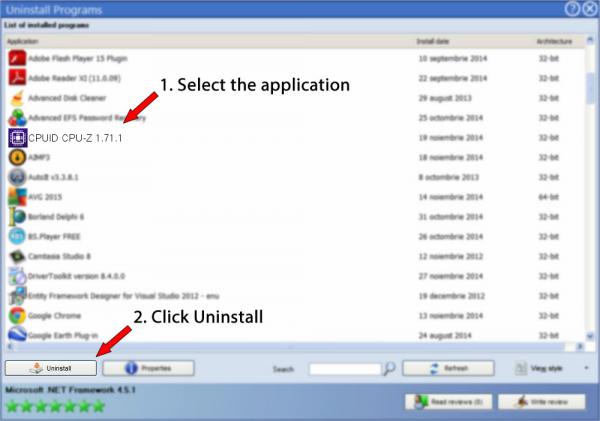