A guide to uninstall CPUID CPU-Z 1.61.5 from your system

You can find on this page details on how to uninstall CPUID CPU-Z 1.61.5 for Windows. The application is frequently found in the C:\Program Files\CPUID\CPU-Z directory. Keep in mind that this location can differ being determined by the user's decision. The full command line for uninstalling CPUID CPU-Z 1.61.5 is "C:\Program Files\CPUID\CPU-Z\unins000.exe". Note that if you will type this command in Start / Run Note you might receive a notification for administrator rights. cpuz.exe is the programs's main file and it takes around 2.06 MB (2162480 bytes) on disk.

A way to erase CPUID CPU-Z 1.61.5 from your PC with the help of Advanced Uninstaller PRO

Frequently, people decide to erase this application. This is hard because removing this by hand takes some skill related to PCs. One of the best EASY approach to erase CPUID CPU-Z 1.61.5 is to use Advanced Uninstaller PRO. Here are some detailed instructions about how to do this: 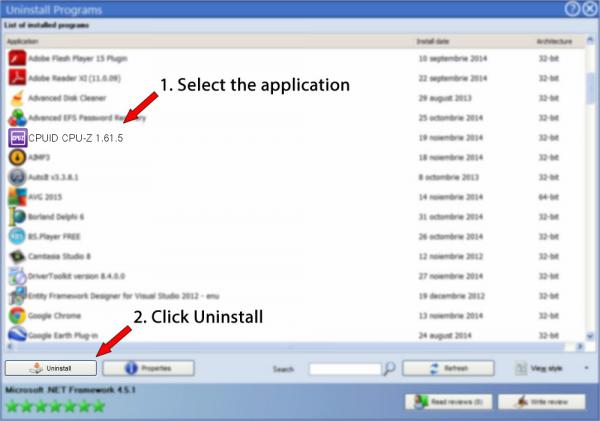