A way to uninstall CAMEO Version 3.1 from your system

This page contains complete information on how to remove CAMEO Version 3.1 for Windows. It was coded for Windows by NOAA,EPA. Go over here for more information on NOAA,EPA. More information about the app CAMEO Version 3.1 can be found at http://www2.epa.gov/cameo/downloading-installing-and-running-cameofm. The application is frequently located in the C:\Program Files (x86)\CAMEO folder. Keep in mind that this location can vary being determined by the user's decision. The full command line for removing CAMEO Version 3.1 is C:\Program Files (x86)\CAMEO\unins000.exe. Note that if you will type this command in Start / Run Note you might be prompted for administrator rights. CAMEOfm.exe is the programs's main file and it takes about 8.86 MB (9291536 bytes) on disk.

This info is about CAMEO Version 3.1 version 3.1 alone.

A way to remove CAMEO Version 3.1 from your computer using Advanced Uninstaller PRO


For instance you can see that for CAMEO Version 3.1:

7. Click the Uninstall button. A window asking you to confirm will come up. accept the removal by pressing Uninstall. Advanced Uninstaller PRO will then uninstall CAMEO Version 3.1. 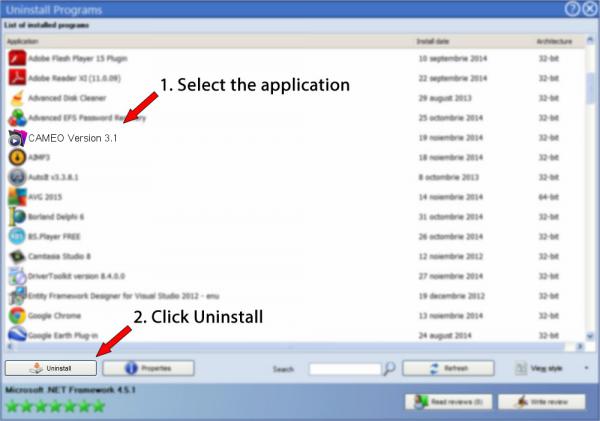