A way to uninstall Brother MFC-8380DN from your system

Brother MFC-8380DN is a software application. This page contains details on how to uninstall it from your computer. It is developed by Brother. Open here for more details on Brother. The application is frequently installed in the C:\Program Files (x86)\Brother\MFC-8380DN folder (same installation drive as Windows). You can uninstall Brother MFC-8380DN by clicking on the Start menu of Windows and pasting the command line RunDll32. Keep in mind that you might receive a notification for administrator rights. Brother MFC-8380DN's main file takes around 44.00 KB (45056 bytes) and is named brdefprn.exe.

Brother MFC-8380DN is a program marketed by the software company Brother. Sometimes, people decide to remove it. This is efortful because removing this manually takes some skill regarding PCs. One of the best SIMPLE solution to remove Brother MFC-8380DN is to use Advanced Uninstaller PRO. Here are some detailed instructions about how to do this: 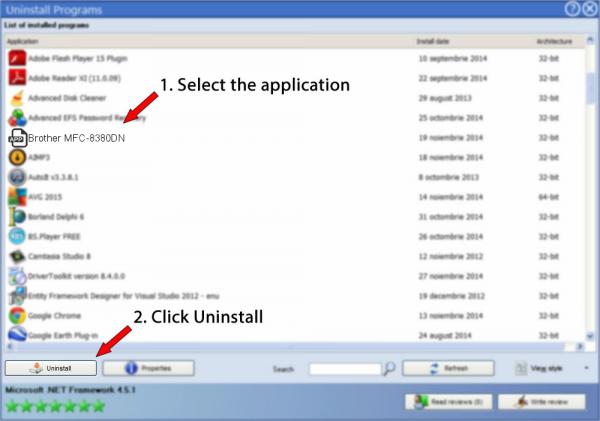