How to uninstall Betrayer from your computer

This web page contains detailed information on how to uninstall Betrayer for Windows. It is developed by Blackpowder Games. Take a look here where you can get more info on Blackpowder Games. Please open http://www.BlackpowderGames.com if you want to read more on Betrayer on Blackpowder Games's web page. Usually the Betrayer program is found in the C:\Program Files (x86)\Steam\steamapps\common\Betrayer folder, depending on the user's option during install. C:\Program Files (x86)\Steam\steam.exe is the full command line if you want to remove Betrayer. Betrayer.exe is the programs's main file and it takes about 25.70 MB (26943504 bytes) on disk.

Some files and registry entries are regularly left behind when you uninstall Betrayer.

How to remove Betrayer from your PC using Advanced Uninstaller PRO

Betrayer is a program marketed by the software company Blackpowder Games. Some computer users want to remove this application. Sometimes this is efortful because performing this by hand takes some know-how related to Windows program uninstallation. The best SIMPLE solution to remove Betrayer is to use Advanced Uninstaller PRO. Take the following steps on how to do this:

6. Scroll the list of applications until you find Betrayer or simply activate the Search field and type in "Betrayer". The Betrayer app will be found automatically. Notice that when you click Betrayer in the list of programs, the following data about the application is shown to you:


For example you can see that for Betrayer:

7. Press the Uninstall button. A window asking you to confirm will come up. Confirm the removal by pressing Uninstall. Advanced Uninstaller PRO will remove Betrayer. 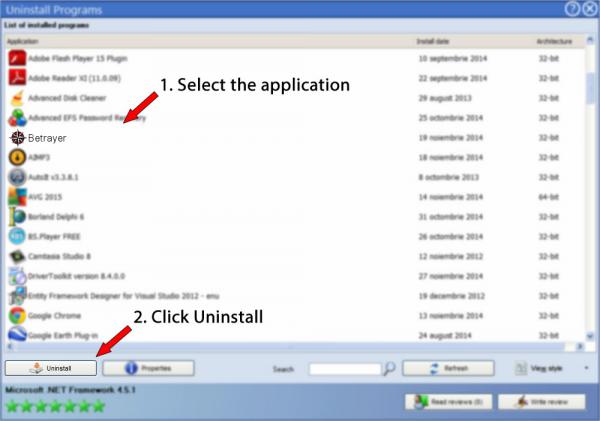 8. After uninstalling Betrayer, Advanced Uninstaller PRO will ask you to run an additional cleanup. Press Next to proceed with the cleanup. All the items of Betrayer that have been left behind will be found and you will be able to delete them. By uninstalling Betrayer using Advanced Uninstaller PRO, you are assured that no Windows registry entries, files or folders are left behind on your system.

This page is not a piece of advice to remove Betrayer by Blackpowder Games from your computer, we are not saying that Betrayer by Blackpowder Games is not a good application for your computer. This page only contains detailed instructions on how to remove Betrayer supposing you decide this is what you want to do. The information above contains registry and disk entries that Advanced Uninstaller PRO stumbled upon and classified as "leftovers" on other users' PCs.