How to uninstall Basilic Web from your PC

This page is about Basilic Web for Windows. Here you can find details on how to remove it from your computer. It was coded for Windows by Basilic Apps. Open here for more info on Basilic Apps. More details about the program Basilic Web can be found at http://sites.google.com/site/basilicapps/. The program is frequently found in the C:\Program Files\Basilic Web folder (same installation drive as Windows). C:\ProgramData\Caphyon\Advanced Installer\{869D4658-6920-4D57-B66A-698FF1DB46F3}\Basilic Web.exe /x {4F901288-7BE5-4B83-B045-446CAF4234AC} is the full command line if you want to remove Basilic Web. Basilic Web.exe is the Basilic Web's primary executable file and it takes circa 982.00 KB (1005568 bytes) on disk.

The following executables are incorporated in Basilic Web. They take 1.58 MB (1653704 bytes) on disk.

The information on this page is only about version 16.0.0 of Basilic Web.

Basilic Web is a program offered by the software company Basilic Apps. Frequently, people want to uninstall this application. This can be hard because performing this by hand takes some know-how regarding PCs. One of the best EASY practice to uninstall Basilic Web is to use Advanced Uninstaller PRO. Here are some detailed instructions about how to do this:

6. Scroll the list of programs until you locate Basilic Web or simply click the Search feature and type in "Basilic Web". If it is installed on your PC the Basilic Web application will be found very quickly. Notice that when you click Basilic Web in the list of applications, the following information about the program is shown to you:


For instance you can see that for Basilic Web:

7. Press the Uninstall button. A window asking you to confirm will show up. accept the removal by pressing Uninstall. Advanced Uninstaller PRO will uninstall Basilic Web. 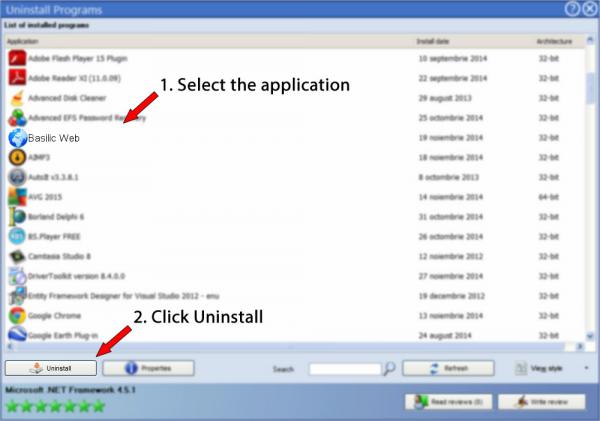 The text above is not a piece of advice to uninstall Basilic Web by Basilic Apps from your computer, we are not saying that Basilic Web by Basilic Apps is not a good software application. This page only contains detailed info on how to uninstall Basilic Web supposing you want to. The information above contains registry and disk entries that our application Advanced Uninstaller PRO discovered and classified as "leftovers" on other users' PCs.