How to uninstall Bandizip from your computer

This page is about Bandizip for Windows. Below you can find details on how to remove it from your PC. It is developed by Bandisoft.com. Go over here where you can read more on Bandisoft.com. More information about Bandizip can be found at https://www.bandisoft.com/bandizip/. The program is often placed in the C:\Program Files\Bandizip folder (same installation drive as Windows). You can remove Bandizip by clicking on the Start menu of Windows and pasting the command line C:\Program Files\Bandizip\Uninstall.exe. Note that you might receive a notification for administrator rights. The program's main executable file is named Bandizip.exe and its approximative size is 2.35 MB (2462592 bytes).

Bandizip is composed of the following executables which occupy 5.68 MB (5959448 bytes) on disk:

The current page applies to Bandizip version 7.020 alone. You can find below info on other application versions of Bandizip:

Bandizip is an application released by the software company Bandisoft.com. Some users decide to remove this program. Sometimes this can be hard because uninstalling this manually takes some experience regarding Windows program uninstallation. The best EASY way to remove Bandizip is to use Advanced Uninstaller PRO. Take the following steps on how to do this:


For example you can see that for Bandizip: 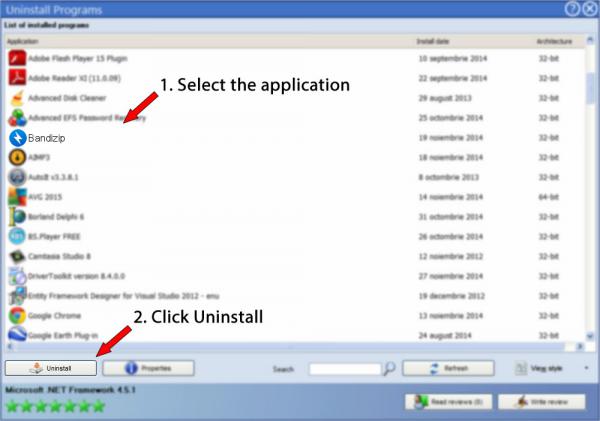 This page is not a recommendation to uninstall Bandizip by Bandisoft.com from your computer, we are not saying that Bandizip by Bandisoft.com is not a good application. This text simply contains detailed instructions on how to uninstall Bandizip supposing you want to. Here you can find registry and disk entries that our application Advanced Uninstaller PRO discovered and classified as "leftovers" on other users' computers.