How to uninstall Aureas v9.5 from your system

This web page contains complete information on how to remove Aureas v9.5 for Windows. It was coded for Windows by Aureas Paris. Check out here for more information on Aureas Paris. Click on http://www.aureas.com/ to get more facts about Aureas v9.5 on Aureas Paris's website. The program is usually installed in the C:\Program Files (x86)\Aureas95 folder. Take into account that this path can differ depending on the user's decision. You can remove Aureas v9.5 by clicking on the Start menu of Windows and pasting the command line C:\Program Files (x86)\Aureas95\unins000.exe. Keep in mind that you might receive a notification for administrator rights. The program's main executable file has a size of 2.82 MB (2956456 bytes) on disk and is titled Aureas95.exe.


This page is about Aureas v9.5 version 9.5 alone. Aureas v9.5 has the habit of leaving behind some leftovers.

Generally the following registry data will not be cleaned:

A way to uninstall Aureas v9.5 with Advanced Uninstaller PRO

Aureas v9.5 is a program marketed by the software company Aureas Paris. Sometimes, people want to uninstall it. Sometimes this can be efortful because uninstalling this by hand requires some knowledge related to PCs. One of the best QUICK practice to uninstall Aureas v9.5 is to use Advanced Uninstaller PRO. Here are some detailed instructions about how to do this:


For example you can see that for Aureas v9.5: 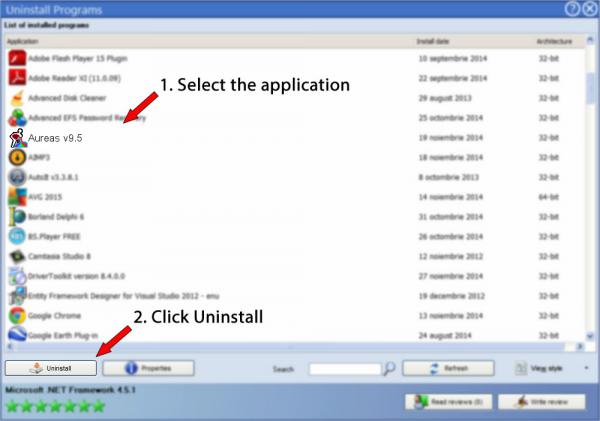 The text above is not a recommendation to uninstall Aureas v9.5 by Aureas Paris from your PC, nor are we saying that Aureas v9.5 by Aureas Paris is not a good application for your computer. This text simply contains detailed instructions on how to uninstall Aureas v9.5 supposing you decide this is what you want to do. Here you can find registry and disk entries that other software left behind and Advanced Uninstaller PRO stumbled upon and classified as "leftovers" on other users' computers.