A way to uninstall Arx Fatalis from your computer

You can find below detailed information on how to remove Arx Fatalis for Windows. It is written by GOG.com. More data about GOG.com can be seen here. Please open http://www.gog.com if you want to read more on Arx Fatalis on GOG.com's web page. Arx Fatalis is typically set up in the C:\Program Files (x86)\GOG Galaxy\Games\Arx Fatalis folder, depending on the user's choice. You can uninstall Arx Fatalis by clicking on the Start menu of Windows and pasting the command line C:\Program Files (x86)\GOG Galaxy\Games\Arx Fatalis\unins000.exe. Note that you might get a notification for admin rights. The program's main executable file is named arx.exe and its approximative size is 2.30 MB (2413568 bytes).

Arx Fatalis is an application offered by GOG.com. Frequently, computer users choose to erase this application. This is troublesome because doing this by hand requires some skill regarding PCs. The best QUICK practice to erase Arx Fatalis is to use Advanced Uninstaller PRO. Here are some detailed instructions about how to do this:


For instance you can see that for Arx Fatalis:

7. Click the Uninstall button. A confirmation dialog will show up. Confirm the removal by pressing Uninstall. Advanced Uninstaller PRO will then uninstall Arx Fatalis. 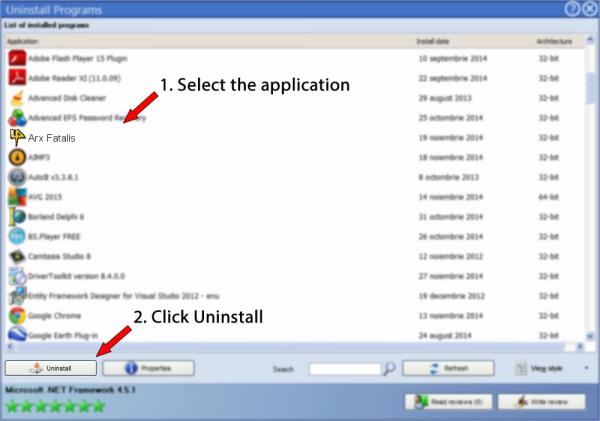