A guide to uninstall AMD AVIVO64 Codecs from your computer

AMD AVIVO64 Codecs is a Windows application. Read more about how to remove it from your computer. The Windows release was developed by Advanced Micro Devices, Inc.. Go over here where you can get more info on Advanced Micro Devices, Inc.. More details about AMD AVIVO64 Codecs can be found at http://www.amd.com. The application is often found in the C:\Program Files\Common Files\ATI Technologies\Multimedia folder. Keep in mind that this path can differ being determined by the user's choice. You can remove AMD AVIVO64 Codecs by clicking on the Start menu of Windows and pasting the command line MsiExec.exe /X{FC6DA3C3-FAFE-568A-7CD2-D1A31BD81481}. Keep in mind that you might get a notification for admin rights. The program's main executable file is titled amdwdst.exe and occupies 611.00 KB (625664 bytes).

AMD AVIVO64 Codecs is a program released by the software company Advanced Micro Devices, Inc.. Frequently, people try to erase this program. Sometimes this can be hard because removing this manually requires some know-how regarding removing Windows applications by hand. One of the best SIMPLE practice to erase AMD AVIVO64 Codecs is to use Advanced Uninstaller PRO. Here are some detailed instructions about how to do this:


For instance you can see that for AMD AVIVO64 Codecs: 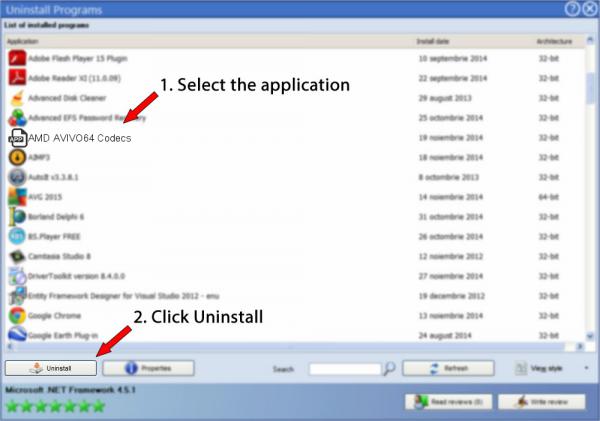