This web page is about ACT! by Sage 2010 for Windows. Here you can find details on how to remove it from your computer. It was developed for Windows by Sage Software, Inc.. More information on Sage Software, Inc. can be seen here. Please open http://www.Sage.com if you want to read more on ACT! by Sage 2010 on Sage Software, Inc.'s web page. The program is frequently installed in the C:\Program Files (x86)\ACT\Act for Windows directory. Keep in mind that this location can differ depending on the user's preference. C:\Program Files (x86)\InstallShield Installation Information\{58795EE4-FCF7-43A4-A5F6-269E69D0CD0B}\setup.exe -runfromtemp -l0x0409 is the full command line if you want to remove ACT! by Sage 2010. ActSage.exe is the programs's main file and it takes circa 324.00 KB (331776 bytes) on disk.

The files below are left behind on your disk by ACT! by Sage 2010's application uninstaller when you removed it:

Supplementary registry values that are not cleaned:

A way to erase ACT! by Sage 2010 from your PC using Advanced Uninstaller PRO

ACT! by Sage 2010 is a program offered by the software company Sage Software, Inc.. Frequently, computer users decide to erase this application. Sometimes this can be difficult because deleting this by hand takes some advanced knowledge regarding PCs. One of the best QUICK way to erase ACT! by Sage 2010 is to use Advanced Uninstaller PRO. Here is how to do this: 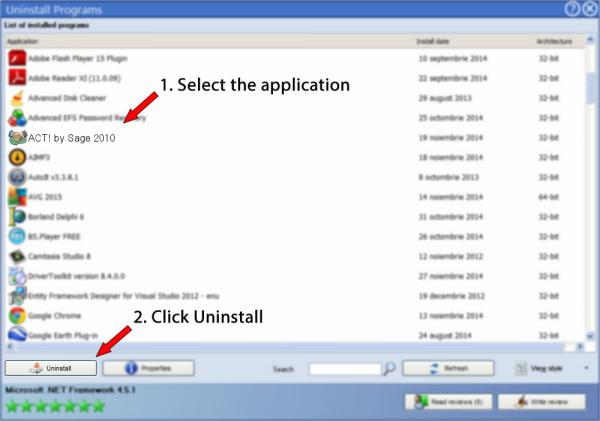