A way to uninstall ACCU-CHEK 360 from your system

ACCU-CHEK 360 is a software application. This page is comprised of details on how to uninstall it from your computer. The Windows release was developed by روش. Further information on روش can be found here. Usually the ACCU-CHEK 360 application is installed in the C:\Program Files\Roche Diagnostics\ACCU-CHEK 360 Connection Manager directory, depending on the user's option during setup. The full command line for removing ACCU-CHEK 360 is MsiExec.exe /X{C50DCD1B-DC00-4A5F-821F-12AE7428F757}. Note that if you will type this command in Start / Run Note you might receive a notification for administrator rights. AcmServerApplication.exe is the programs's main file and it takes approximately 103.00 KB (105472 bytes) on disk.

ACCU-CHEK 360 is an application released by the software company روش. Frequently, users want to erase this program. Sometimes this can be easier said than done because removing this manually requires some advanced knowledge regarding removing Windows applications by hand. The best SIMPLE action to erase ACCU-CHEK 360 is to use Advanced Uninstaller PRO. Take the following steps on how to do this:

6. Scroll the list of applications until you locate ACCU-CHEK 360 or simply click the Search feature and type in "ACCU-CHEK 360". If it is installed on your PC the ACCU-CHEK 360 app will be found very quickly. After you click ACCU-CHEK 360 in the list of programs, the following information regarding the program is made available to you:


7. Click the Uninstall button. A window asking you to confirm will come up. accept the uninstall by pressing Uninstall. Advanced Uninstaller PRO will uninstall ACCU-CHEK 360. 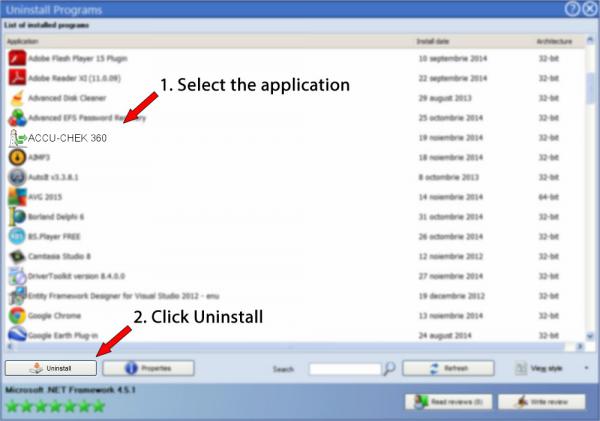