A guide to uninstall 4Team Sync2 from your PC

A way to erase 4Team Sync2 with Advanced Uninstaller PRO

4Team Sync2 is a program released by 4Team Corporation. Some users try to remove this application. Sometimes this can be hard because deleting this manually takes some experience regarding Windows internal functioning. One of the best EASY solution to remove 4Team Sync2 is to use Advanced Uninstaller PRO. Take the following steps on how to do this:

6. Scroll the list of applications until you locate 4Team Sync2 or simply activate the Search feature and type in "4Team Sync2". If it is installed on your PC the 4Team Sync2 program will be found very quickly. Notice that when you select 4Team Sync2 in the list , the following data regarding the application is available to you:


For example you can see that for 4Team Sync2:

7. Press the Uninstall button. A confirmation dialog will come up. accept the removal by pressing Uninstall. Advanced Uninstaller PRO will uninstall 4Team Sync2. 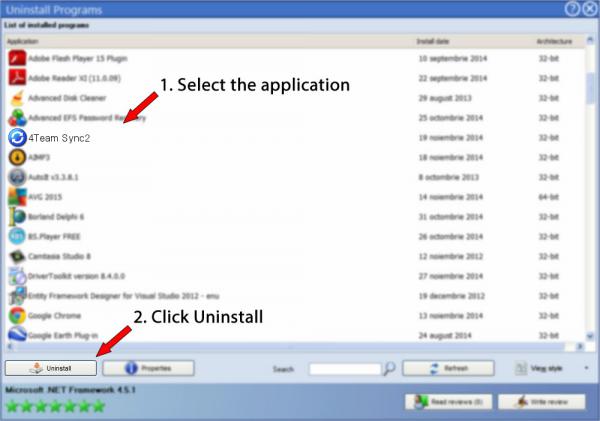