A way to uninstall 3D Bridge DS4 from your PC

3D Bridge DS4 is a Windows application. Read more about how to uninstall it from your computer. It is developed by DAZ 3D. More information about DAZ 3D can be seen here. 3D Bridge DS4 is typically installed in the C:/Program Files (x86)/DAZ 3D/DAZStudio4 folder, but this location may vary a lot depending on the user's decision when installing the program. 3D Bridge DS4's complete uninstall command line is C:\Program Files (x86)\DAZ 3D\DAZStudio4\Uninstallers\Remove-DS4_3DBridge_Win32.exe. 3D Bridge DS4's primary file takes about 6.08 MB (6375516 bytes) and is named Remove-DS4_3DBridge_Win32.exe.

...click to view all...
If you're planning to uninstall 3D Bridge DS4 you should check if the following data is left behind on your PC.

3D Bridge DS4 is an application marketed by the software company DAZ 3D. Sometimes, computer users try to erase it. Sometimes this is difficult because uninstalling this by hand takes some experience regarding PCs. One of the best QUICK solution to erase 3D Bridge DS4 is to use Advanced Uninstaller PRO. Take the following steps on how to do this:

6. Navigate the list of programs until you find 3D Bridge DS4 or simply activate the Search feature and type in "3D Bridge DS4". If it exists on your system the 3D Bridge DS4 program will be found very quickly. After you click 3D Bridge DS4 in the list of applications, some data about the program is made available to you: 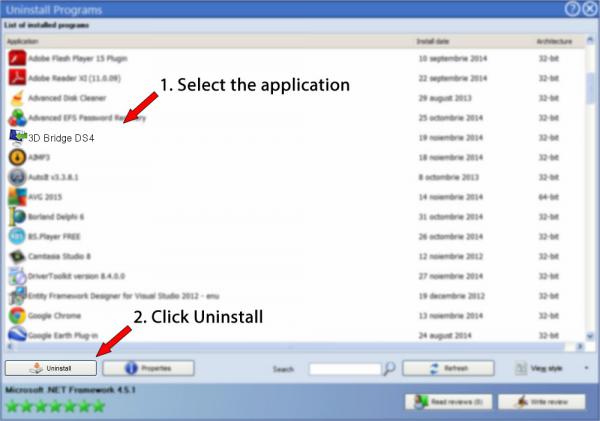